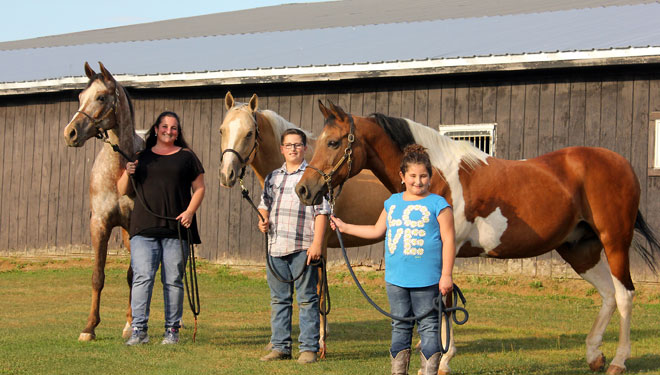 I’ve decided that being a horse show mom is not for the faint of heart!

As I packed my car with everything from horse treats to chaps I kept wondering how I was going to see out of my windows on the highway! Three hours and four stops later we arrived at the fairgrounds with game faces on.

Horse stalls were bedded, tack and dressing stalls were set up, we had all ridden at least once in the show ring, tack had been cleaned and the horses had been bathed and fed. I sat down for the first time in hours. My kids were still going strong. My 13 year old son was going to put on his hat and “look for ladies” and my 8 year daughter just wanted to ride “one more time”! I needed a cocktail. However, none of that was going to happen   if we don’t find our hotel – we might have been sleeping with the horses.

Show day started at 6:30am. Horses were fed, lunged, saddled and ready for the day. My son and I were first up; amateur to ride western pleasure.  I have been riding for at least thirty-nine years and somehow forget what to do every time I go through that gate (have you ever seen SpongeBob when he goes for a driving test? – that’s me).  There was also a HUGE flock of pigeons in this arena – I’m fairly certain that I had crossed into some kind of horror film. Thank goodness my son has a better head on his shoulders (and no fear of birds) – he placed first. I managed to stay astride my horse and got a second!

My daughter was up next; her first time in walk trot and I was a nervous wreck! I was sure that the pigeons were going to attack, she was going to fall off and I wouldn’t be able to get my plus size behind over the fence to get to her fast enough! I paced the entire time, so busy fretting, I didn’t even notice that she had done really well and placed second!

We showed throughout the ninety degree day. I had worn  so many hats  – I was a gopher (moommmm, I forgot my gloves), a doctor (moommm, I fell off my bike and scraped my knee), a groom, a competitor, a lunch go-getter (moommmm, I’m so hungry, I can’t make it!), a tough guy (get out of the mud – you have to show in a little while) and so many more. My head hurts just thinking about it.

Later in the evening at the hotel, with bellies full and clean smelling  – I looked over and found my kids laughing with each other. That is what it is all about. No matter how much I had sweat, how much money had been spent or how many times I had heard the word mom – I wouldn’t trade that moment for anything in the world!