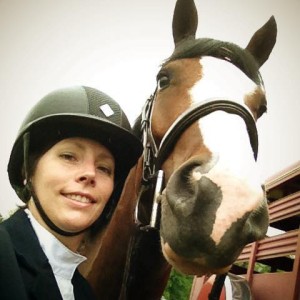 When someone asks what discipline I best associate myself with, my first answer would be as an eventer. My answer as to what comes in 2nd is fast becoming the hunters. My first true and lasting experience with hunters was just last year when Paladin was 4. After his first two mini-trials, with less than ideal dressage scores, I wanted to give him some time to mature mentally. He really enjoyed the jumping phases and I decided that I wanted to find more opportunities to build his confidence over fences than just a stadium round here and there at the mini trials. I firmly believe that building a safe and reliable horse over fences, takes consistent steps to build confidence and trust through the lower heights.  I figured that showing in the hunters would allow both of us to gain experience together and expand our horizons. I found the added difficulty of attempting to present a horse with a relaxed and steady way of going particularly challenging. Trying to ride like I know what I am doing is even more so, especially since historically my only goal in jumping was what I call the 3 S’s ((Stay on (rider), Stay up (rails) and Stay Sane (horse)). Last year we enjoyed showing in the cross-rails and 18” divisions, the lower heights really allowed us to get a feel for the ring and to better understand proper striding.

The Up & Over Hunter Jumper Association is an ideal fit for us. With shows scheduled around northeast ohio nearly every weekend of the summer, there are plenty of opportunities to get out and show at any height.  Even though I still would not consider myself a “hunter”, I thoroughly enjoy the relaxed pace of the shows, the challenge of memorizing courses (without the aid of numbered fences) and meeting new friends. My attempts to ride “like a hunter” are generally futile and this weekend proved that I have a lot of work to do if I want to be competitive in the crowded baby green 2’-2’3” division. I was running a bit late to the show Saturday and only had time for a short warm up prior to heading to the ring to check out the pattern and show. My warm-up round was “ok”, Paladin felt good and picked up his correct leads obediently. The only blazing faults were that we added in both lines and had a rub. Our first judged round left quite a bit to be desired when I forgot which of three singles next to each other I was supposed to aim for as my first fence, I made a second opening circle to get my head together. Later in the course I again found myself questioning where to go, but we committed and we managed to finish up without going off course. Our third round had been going well but I could tell he was starting to tire. He had a good look at an oxer that was a non-event in our first round.  As I felt him questioning my intent for us to go over, I gave him a snap with the crop and over he went. I was just so proud that he didn’t stop that I threw all “hunter” etiquette out the window and gave him a hearty pat and an audible “good boy!”. I later stopped by the photo trailer and the image of that particular question was quite priceless, I had a great big smile of my face and his nose was practically between his knees as if he’d seen a tarantula. If we had been riding stadium rounds I would have been perfectly thrilled to get around a nice sized and well decorated course clean and free from drama. But, these are hunters… chips, adds, pops and pats on the neck just don’t add up to wins!

When I first started showing hunters in the cross-rails and 18” divisions last year, I had read a rather informative article regarding hunter scoring.  When I stopped into the show office to confirm that I had not placed in any of our classes I was reminded of this article. I was able to catch a glimpse at the score sheets as the secretary flipped through them, I was happy to see quite a lot of bascules with just a couple karats and a dot. Seeing this gave me hope and a gentle reminder that this technically is a “scored” event and there is certainly room for improvement. For my next hunter show I want to really focus on riding my hunter rounds with the same deliberate attention to detail as I ride my dressage rounds. This is a realization that I had not really considered before failing so badly this past weekend. In the end it may not make much of a difference to how well we do in a crowded class, but since I am an inherently competitive person and I have a hard time showing my horse “just for schooling” perhaps it will help to challenge me enough to at least make it back into the ribbons. Next stop? We will be giving Beginner Novice level eventing a try at the Hackamore Farms Mini-Trials July 12th, 2015.

What’s in my ringside tote?
Quic Braid – to keep his mane and tail neat and tidy
Green Spot Remover – to keep all his chrome bright and clean between rounds
Rubbing Cloth – see above and add some slobber and boot dirt
Laser Sheen – for a natural looking stain and dust repellent glow
Navajo Brush – perfect for bringing out the “bloom” for that show ring shine.
RenFlex – to put up his tail before and after showing