Competition day had arrived for the Hackamore Farm Mini Trial held in North Jackson, Ohio which is part of the Northeast Ohio Mini Trail Series (NEOMTA). This was my competition of choice to make my move with Paladin up to the Beginner Novice 2’7” division, after completing the Winona Horse Trials in the Starter 2’ division successfully in May. My dressage ride was not until 12:48pm. I turned Paladin out at 6am with his barn buddies to get some pre-show grazing in while I finished up packing the truck and trailer and had breakfast with my family. At 10am I brought everyone in got busy bathing and grooming him for the show. After weeks of heavy rain we were very lucky to stay dry the 2 days preceding the event. Everyone was blessed as event day brought sunshine and temps right around 80 degrees. A forecast of afternoon storms had me hoping to stay dry, but expecting to get wet as I tossed an extra set of clothes, towels,  an umbrella and mud shoes in the truck. We loaded up and made the short 30 minute drive over to Hackamore Farm.

Upon checking in I was informed that the entire back half of the cross country course had been closed off due to the degrading footing and the optimum time had gone from around four and a half minutes down to 1 minute 59 seconds. With that news my stress level was reduced to no more than that of a normal schooling day. When I had schooled the course on Friday, both the fence that I deemed my “trash talk” fence and the water crossing that my horse was uninterested in making for me, were both in the back half of the course. I knew that I was no longer facing certain elimination which made for a much more enjoyable time on my part. I took a walk out on course to review the cutoff before fence 4 and the restart at fence 13. It was simply a u-turn with plenty of room. I had my optimum time watch and I would plan on taking a look after the 13th fence. I then headed over to take a look at the show jumping course (of which I completely forgot to review prior to leaving the farm on schooling day). It consisted of 10 elaborate and brightly colored jumps arranged with only a couple tight-ish turns, but otherwise quite straight forward and appeared to very ride able. I headed back to the trailer, made friends with my neighbors for the day and got busy pulling out tack for dressage. My husband (personal photographer), 2 year old son and my father (official toddler wrangler) were along for the day and were busy playing in the grass while I tacked up. I pointed them in the direction of the dressage ring and headed out to warm up. 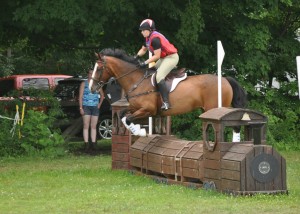 Our dressage test went reasonably well for us. The right canter lead that eluded me at the Winona horse trials was a bit late but was at least correct. There were fewer instances of outright resistance and rushing then what I had experienced on our previous tests. I was disappointed that he did not relax and stretch during the free walk but was happy that I had gotten a nice square halt at the end. The judge was very gracious at the completion of our test. She came out to discuss our rough points and asked me to perform a 20 meter trot circle giving him an additional 3 inches of rein. After watching me struggle to get him settled into the circle, she inquired as to if he was typically strong and prone to rushing at which I replied yes. It is an issue we had been dealing with for quite some time. She also inquired as to who my trainer was, at which I was honest and let her know that I have not had a regular trainer to assist in my riding. I was happy to hear that she felt that we were due for some regular dressage lessons in order to help sort out my riding errors, which would in turn help Paladin to perform better. She felt that it would be well worth the time and cost associated with them. She also said that the talent is “there”, that Paladin has three very nice gaits and that we just need some direction to help him come into his own and shine. I was so happy and thankful that she took the time to talk with us regarding our ride. I have been struggling with his resistance to dressage for over a year and I know that my efficacy as a rider has been degraded as I struggle with him and with physical issues in myself. This was just the wakeup call I needed!

I got back to the trailer feeling that the toughest part of our day was over. While chatting with the neighbors I untacked Pal hung up his bridle, put away our dressage saddle and pulled out all of our jumping gear. I got him tacked and booted up for stadium and cross country. After warming up over the practice jumps, the stadium round went excellent. Paladin did not question any of the obstacles. He felt great and we only had a slight rub at one of the fences but thankfully the rail stayed up. I felt awesome since I had not schooled him over them and he had never seen them previously. He is so honest and all of our work last year with the hunter shows has certainly paid off. He seems 100% committed to going over whatever jumps I point him at. 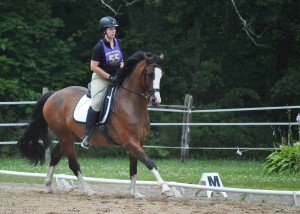 I allowed him a few minutes to breathe prior to checking in for our quick cross country jaunt. He stood quietly in the starting box and we waited for our countdown. “30 seconds… 15 seconds… 10, 9, 8… Have a great ride!” I started my optimum time watch which had been set at a whole 2 minutes and we cantered off to the first fence. He sailed over easy and we galloped on over a roll top and the log cabin. After the u-turn where they closed off fences 4 thru 12, we took fence 13 which was cowprint barrels and headed towards the wooden train that was fence 14. I took a look at my watch and seen that we had just under 30 seconds to go and pulled him up into a slower canter and kept him steady down the galloping lane and over the fruit stand to finish up the course. I had glanced at my watch at the finish and it looked like we were about 15 seconds under but by the time I bumped the stop button after pulling him up it read 6 seconds.

Back at the trailer I untacked him, sponged him down, offered him a drink and took him for a walk. When we got back from our walk I put I ice wraps on his front legs and took a quick look at startbox to see where I was in the standings. I had gotten a 40.0 in dressage and was in 8th place out of 9 entries. I knew that I went double clear in stadium and dressage and that we would only be in the ribbons due to another team’s bad luck as they award ribbons to 6th place. The storm clouds were starting to gather and I heard an announcement over the PA system that they wanted to push forward and if you were ready to start any of your phases to report to the respective steward and that they would start anyone who came regardless of order. I quickly packed up all of our tack and belongings, thanked my dad for coming along to watch my son and sent him on his way. I loaded up Paladin and hopped into the truck with the rest of my family as a steady drizzle started falling. I relaxed for a few moments before picking up an umbrella and heading up to the house to check the status of the scoring hoping to be able to pick up my dressage test. Nothing had been released and I headed back down to the truck. I zipped out a couple messages to friends and facebook and anxiously waited for the scores to be posted. I refreshed startbox scoring again and was excited to see that stadium scores had been posted. It looked like the third place competitor had a rail down which moved them all the way down to 8th and moved me up to 7th. Finally the XC results were posted, I was happy to see that I was only 10 seconds under and the closest to optimum time in our division. It was also evident that 3 competitors who had been ahead of me, had some issues on cross country and I was moved up to finish in 4th place.

All in all it was a good day for us. The move up in division was a non-issue, granted having a much shorter cross country course certainly helped with making it as easy as possible for Pal the first time out. Stadium jumping at the higher level was a blast and Dressage was very rewarding thanks to an excellent judge. It is one thing to lose your placing after dressage due to issues in jumping or cross country, I have been there on occasion and yes it is disappointing. However, it is nowhere nearly as rewarding to gain places due to others misfortunes, and I have no interest in relying on the mistakes of others to bring me better ribbons. I am incredibly competitive, and when I place I want for it to be because we were the best overall. It’s time to pick a dressage trainer, tackle my own riding deficiencies, and be a more effective rider so I can get those clean wins that I can really be proud of. We’ve got three weeks to work before our next event, which will be down at Stone Gate Farm in Hanoverton, Ohio on August 2nd!

What keeps Paladin going?
In addition to 12+ hours of daily turnout I feed:
Strategy Healthy Edge – Paladin is a high energy “easy keeper” this feed provides the balanced nutrition he needs, including higher fat and controlled sugar and starch that is commonly recommended for drafts and draft crosses.
Apple a Day Electrolyte – This salt-potassium based electrolyte is palatable and helps to ensure that my horse is getting the electrolytes he needs to keep him healthy during the hot summer months.
Wheat Germ Oil – Because Dapples don’t grow on tree’s!
Equi-Ferm XL – Promote a healthy gut and better nutrient absorption with pre-biotics and pro-biotics!
Luck & Love Alfalfa & Apple Cookies – Because I love him and he’s a good boy!